New Top Up Tap for Tarbert 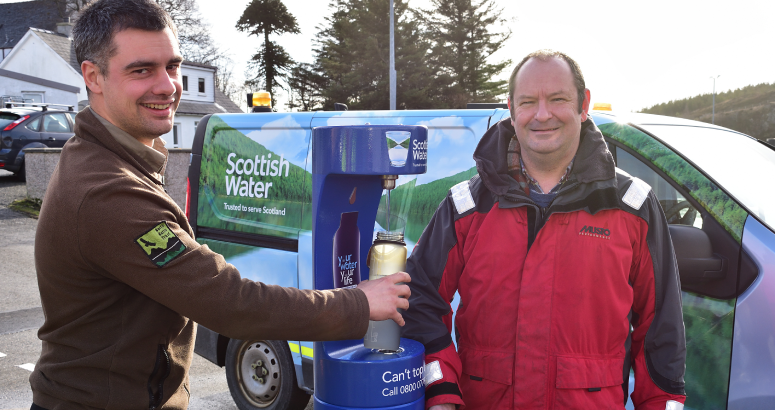 Hydration on the go

Residents and visitors to the beautiful village of Tarbert on the Isle of Harris can now make use of a free water refill point installed by Scottish Water.

The new Top Up Tap, which is located at Pier Road car park, is part of a drive to encourage people to carry reusable bottles to stay hydrated, protect the environment by reducing waste and save money.

Two members of the Scottish Water operations team on Harris, Willie MacRae and James Maclean, were joined by local councillor Grant Fulton and Michael Hunter of the North Harris Trust to officially launch the tap.

“We’re very pleased to be able to launch this new facility for the village which will help people stay hydrated when they are out and about in Tarbert, as well as saving them money and reducing the need for single use plastics by making it easy to refill a reusable bottle.

“This free water refill point makes a top up of clear, fresh drinking water on the go accessible to all those who live in Tarbert or who visit it throughout the year.”

“I am delighted to see that Tarbert now has its very own top up tap from Scottish Water. Any initiative that makes it easier to cut down on waste is to be welcomed and the more we can encourage people to get into the habit of carrying a reusable bottle, the better.

“The village can get very busy throughout the summer and I’m sure it will be well used by locals and visitors alike.”

More than 60 taps have now been installed at sites across Scotland including harbours, beaches, national parks, botanical gardens and other top tourist attractions.

More information about our Your Water Your Life campaign can be found at www.yourwateryourlife.co.uk