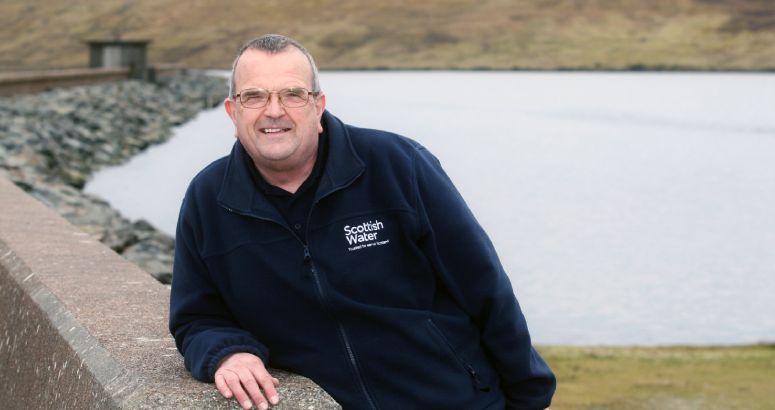 Bobby is looking forward to retirement after 40 years in the industry.

A stalwart of the Scottish Water team in Shetland is retiring after marking more than 40 years of public service.

Bobby Fullerton (64), from Lerwick, retired from his role as a senior water sampler at the end of March - more than four decades after he started with the team.

Bobby initially started work in the water industry in 1975 when he joined Shetland Islands Council, before being lured away by the promise of commercial fishing.

However, in a dramatic turn of events while heading to Fraserburgh to land fish, the boat Bobby was on sank – leaving him and the rest of the crew to bail out on the life raft until they were picked up by another Shetland fishing boat also travelling to Fraserburgh. The crew was forced to hire a boat while waiting for a new one to be built and Bobby jumped at the chance to rejoin the water board again towards the end of 1981.

“I found out the grass wasn’t always greener on the other side!”

Bobby worked in the water operations side of the business from 1981 to 2006, with a short sabbatical to cover for colleague in the water treatment at Sandy Loch Water Treatment Works. In 2006 Bobby then joined the sampling team where he has worked for the past 16 years. He marked 40 years of continuous service at the end of 2021.

“It has gone by in a flash,” Bobby said. “Especially the last few years, which is funny as I thought they might drag due to covid.

“I really enjoyed my time in networks – finding the issue and repairing the water mains was very satisfying. I’ve worked all over Shetland, from Fair Isle to Unst but I really enjoyed working in Lerwick, working in the town. Trying to find the bursts, digging them up and repairing them, that was very, very satisfying. We physically did do it ourselves a lot of the time, it was a pick and shovel in the town.

“There was one incident that sticks in my mind where I was trying to put a saddle on a 6 inch PVC water main when the pipe just split from end to end and I just got absolutely soaked. That left us with a bit of a problem to deal with. There have been lots of jobs and lots of bursts in strange places over the years.”

“The health and safety aspect of the job is something else that has changed remarkably over the time I’ve been in the industry, everything is much safer now, even down to things like finding the infrastructure in the ground. I remember one job where we were working on the main street in Lerwick and we had a digger in which accidentally struck a pipe and there was a jet of water going 20 feet up in the air on the main street!”

Bobby, who is a keen motorcyclist, says he is looking forward to having more time to spend on life outside work.

“The sampling side of the business is getting busier and busier since I started in the role,” he explained. “There are more and more samples required. I’m looking forward to retiring, it is a busy job and there is so much that needs to be done that I am looking forward to a bit of a rest.

“We live in quite an old house which was built around 1869 so I’ll definitely be doing a fair bit of DIY around there – there are lots of things that need attention. I also have a motorbike so I’ll be running around with the motorcycle club here and I’m just going to take it easy although I might change my mind after a few months of doing that!

“I’m going to miss the people that you get to work with for a long time. I don’t think there is anyone left from the days that I started which is a strange feeling but it is nice to be part of the team.”

“Bobby’s presence will be missed from around the office and all the sites he visited every week sampling. His great sense of humour and willingness to help anybody and everybody who knocked on his door for yet another ‘quick favour’ will certainly not be forgotten. I personally will miss our Friday morning chats, putting the world to rights.”
Scroll to top