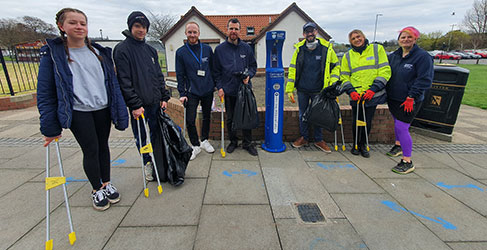 A good Friday was had by all in Burntisland, Fife, as Scottish Water officially launched its top up tap in the town, handing out nearly 200 reusable water bottles to local residents.

The tap, which is located on the Links in Burntisland, has been installed just in time for the summer as visitors flock to the park and beach.

n a bid to help reduce single use plastics and promote the tap, a team from the utility were on site on the bank holiday to giveaway the reusable water bottles. Hundreds of residents from across the town came to claim theirs, so many in fact, that the team ran out within an hour!

After this, the team six from Scottish Water and two children from Kirkcaldy, Lucy and Oliver, aged 14, carried out a local litter pick as part of Keep Scotland Beautiful’s ‘Spring Clean Scotland’ initiative, collecting litter from the beach, and park.

Scott Fraser, Regional Corporate Affairs Manager said; “We had a fantastic day in Burntisland, speaking to local residents, handing out water bottles and doing a wee litter pick. Everyone we spoke to was so enthusiastic about the tap, with one person declaring that ‘ye cannie beat Scottish water.’

So far, our top up taps across Scotland have saved the equivalent of over one million single-use plastic bottles and judging by the enthusiasm for the tap on Friday, I suspect it wont be long until a further million is saved!”

The tap will remain a permanent feature in the town and will be regularly inspected and cleaned.